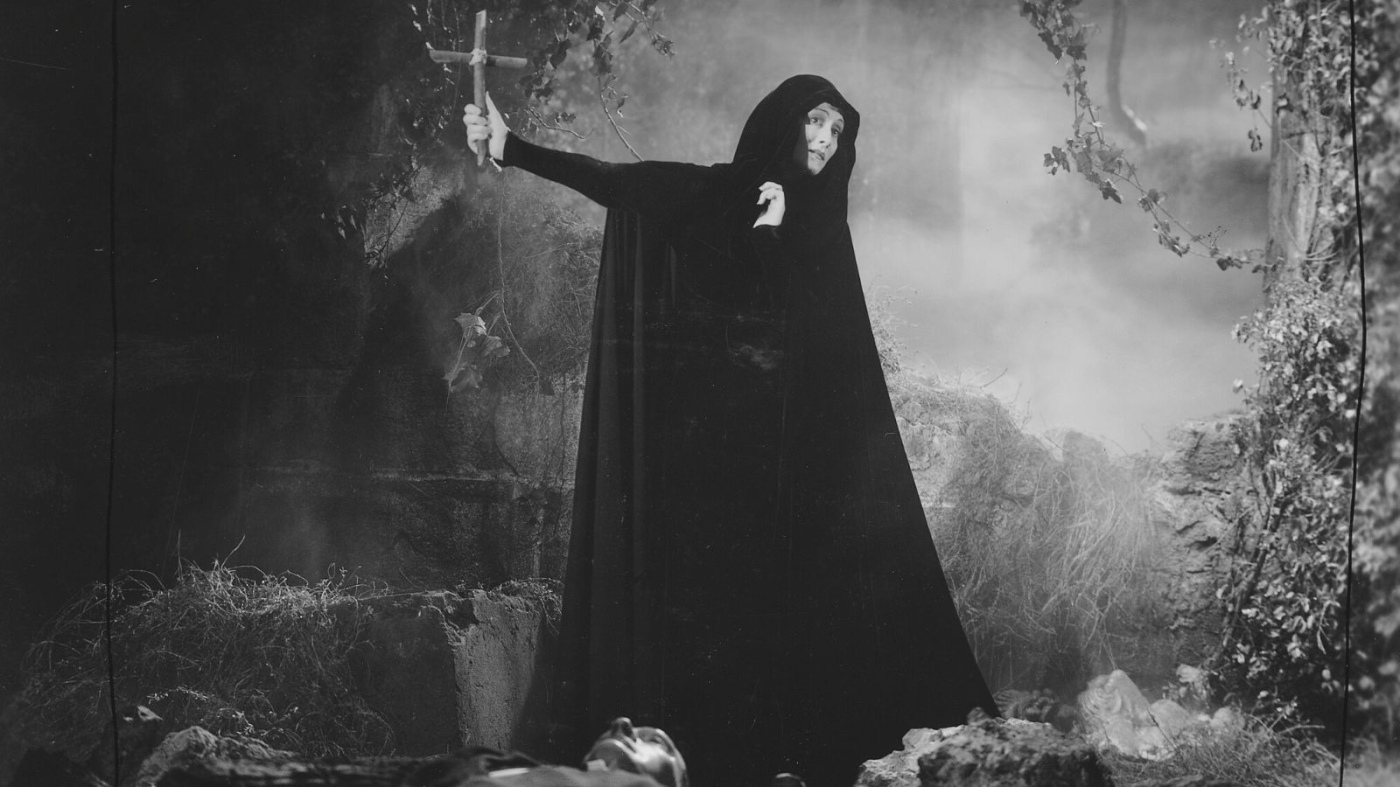 When you watch a classic Universal horror film, you have certain expectations of them. Monstrous figures wander gothic backdrops. Expressionist lighting and excessive fog create ghostly atmosphere. These films are meant to evoke “the old world” or the horrors of science gone wrong.

There’s exactly one scene like that in Dracula’s Daughter. Gloria Holden’s Countess Marya Zaleska, having stolen Count Dracula’s body, sets it on fire. Draped in a black shroud, she lifts a cross in a fog shrouded forest to make sure Dracula won’t rise again. It’s a gorgeous scene. However, it’s the only scene that evokes the mood of classic Universal horror films. Everything else in the film comes across as unintentional parody.

Dracula’s Daughter opens where 1931’s Dracula ended. Police stumble on Van Helsing standing over Dracula’s body at Carfax Abbey. These police really do stumble. It’s a hint as to the tone of this film. The cops in this film are of the Keystone variety. Anyways, Van Helsing turns to his former student, psychologist Jeffrey Garth, to help convince police he didn’t kill a man but instead killed a Dracula. Soon though a rash of familiar murders starts up as a Countess Marya Zaleska seeks Garth for her own problems. See, she’s Dracula’s Daughter and needs Garth’s help overcoming her curse of being a Dracula. Except she can’t stop killing people!

With the exception of Gloria Holden’s performance, this movie seems hellbent on not being a Universal horror movie. Most of the characters spend the running time telling each other “Draculas aren’t real!” or trotting out the “We live in a modern world, these things don’t exist!” mantra. This film might set the template for all future terrible and useless cops to come in horror movies. About half way through, I asked myself if this film had any real interest in the supernatural or the gothic. It does not.

Gloria Holden knows the kind of film where she should exist. There’s an almost tragic quality to her Countess Zaleska. She wants so much to not be a Dracula only for her to give in to those temptations by the end. The only interesting angle in the film is the bisexual subtext. Zaleska kills both men and women and lusts after both. A case could be made the studio inserted her desire for Garth as a means to deflect from the Hayes Code. However, I think the sincerity Holden performs with turns Zaleska into an equal opportunity killer and sexual predator.

Unfortunately, Holden’s performance and that subtext gets wasted with this film. Interactions between Zaleska and her servant Sandor that should highlight a woman fighting what her nature instead sound like a Simon and Heccubus routine from Kids in the Hall. In fact Sandor who probably was intended to be “menacing” and “unholy”, has an unfortunate Moe Howard haircut and sounds more like Eeyore. When he kills Zaleska at the end, the audience probably should feel betrayal. Instead because it’s done with what looks a toy bow and arrow set, it just looks ridiculous.

It should be noted this was the sequel to 1931’s Dracula. Unlike Frankenstein being followed immediately by Bride of Frankenstein, this film came out five years later. Apparently, Universal rushed Dracula’s Daughter into production so MGM wouldn’t their release their own Dracula adaptation. As this was a sequel to Tod Browning’s atmospheric and gothic nightmare, I suspect fans of that film came into this with expectations of what a Dracula film should be. Instead they got to see a weird comedy with queer subtext and a gloomy sidekick. I suspect they left disappointed and bewildered.