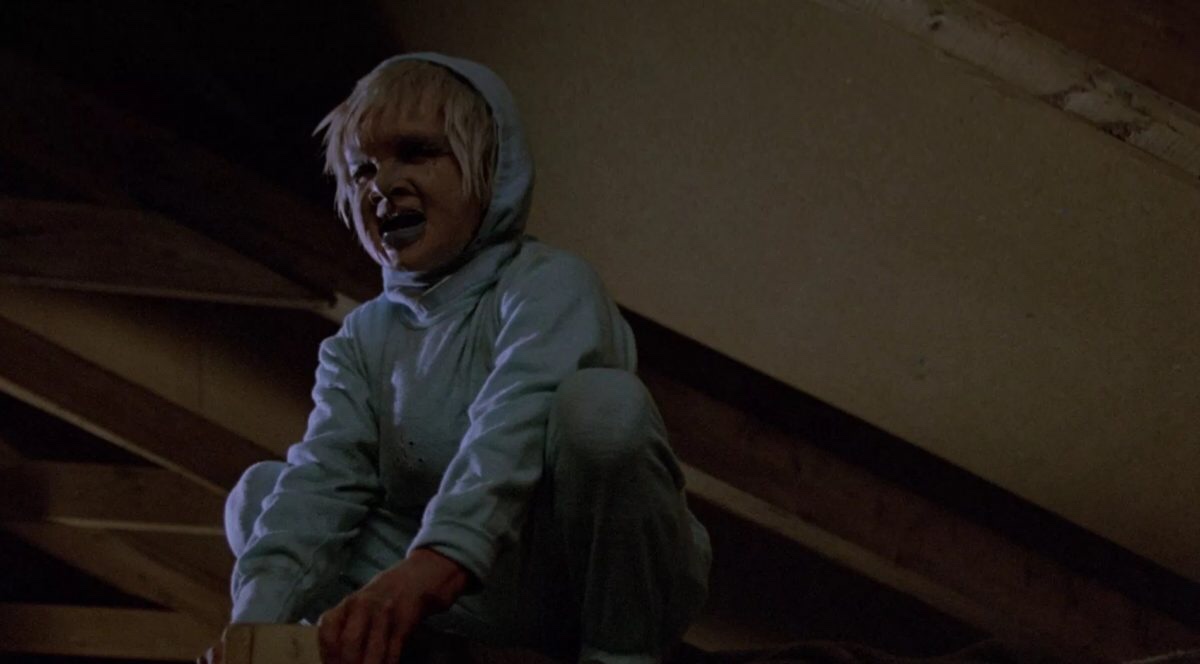 A question a couple of months ago on Twitter asked “Who is our greatest living horror director?” This is always a fun question to ask but also gauge where a person might stand with you. People have their reasons for their favorites. They directed a favorite from when they first got into horror, there’s a scene that just never left you, or they just have an incredible body of work. When I saw the question, my immediate reaction was “David Cronenberg.”

Admittedly it’s a basic answer. Cronenberg’s body of work speaks for itself; Videodrome, Scanners, The Dead Zone, The Fly, and of course, The Brood. Few film directors transformed horror in the way Cronenberg did. Yet even in that body of work and among his generation, few directors made films as intensely personal as his. Take his return to sci-fi and horror, this year’s Crimes of the Future. The film seems as much a statement on his place in modern filmmaking as much as it aims to make audiences squirm. His films are about ideological horrors as they are about the visceral ones he brings to life.

This is why a film like The Brood continues to terrify over 40 years later. The film has one of the most Cronenberg set ups to it. Father Frank Carveth is in the middle of a divorce with his soon to be ex-wife Nola. They share custody of their daughter Candice. Nola lives in psychological facility with her Dr. Hal Raglan. Raglan is the inventor of a unique psychology practice called psychoplasmics. He encourages his patients to physicalize their emotions into welts and cysts on their body. However, Frank gets Candice one weekend and notices welts, scratches, and other signs of abuse. He threatens to end visitations to Nola. Dr. Raglan begins more intense therapy with Nola and well, a mother will do anything to get her daughter back.

David Cronenberg describes The Brood as his most classical horror film. Calling it a monster movie isn’t totally out of the question. A mad scientist practices a strange new science that goes out of control. Monsters are on the loose, this time in the form of genre staple killer kids. What makes it makes it different is how Cronenberg adapts that to the modern day. The killer kids aren’t children of good parents who choose to do evil. He’s not interested in framing killer children as a fear of the next generation. These creatures come from the rage and anguish of the divorce at the center of the film, truly the children of psychoplasmics. These children are physical manifestations of Nola’s rage at the people who she assumes wronged her or have changed her family dynamic. Samantha Eggars performance allows for sympathy in a woman whose therapy can’t heal her. Cronenberg and Eggars’ performance make makes clear she was broken before the film. Psychoplasmics only pushes her over the edge.

What’s also at the core of The Brood is generational trauma. In one of her therapy sessions, Samantha Eggars’ Nola goes into the abuse her mother dealt her and how her father let it happen. Nola’s new “children” are a result of this trauma passed down. However, Frank and Nola’s daughter Candace is in this cycle as well. She too is now a child of divorce like her mother. It’s implied that Candace relives the trauma from her mother through abuse. Meanwhile, Frank passively pursues legal channels to protect Candace from her mother. He only truly confronts her mother when the situation spirals out of control. The lesions on Candace at the end hint that Nola’s ability to manifest rage maybe hereditary. It’s the classic kind of “The End?” seen in traditional horror. However, it’s terrifying here because it indicates a restart to the cycle of generational trauma present in the film.

It also needs to be mentioned this is the first of Cronenberg’s films to be personal. The script was born out of his own very messy divorce. He joked that after seeing Kramer vs. Kramer he wanted to make a realistic film about the subject. The Brood was his fifth film. His four previous films, Stereo, 1970’s Crimes of the Future, Shivers, and Rabid, all seem like exercises in science fiction and horror while pushing what those genres can do. Shivers and Rabid both owe a lot to George Romero’s zombie films In The Brood though, Cronenberg still pushes science fiction and horror but by injecting it with deeply personal drama, he created something even more terrifying.

Cronenberg frames the concept of psychoplasmics both as a cult and a kind of self help technique. Oliver Reed’s Dr. Raglan acts as much a cult leader as he does new age psycho babble guru. His patients don’t just get treated at his Somafree Institute but they live there too. The process of psychoplasmics involves role play in a way that allows Raglan to control his patients. When he eventually sends them away for their safety, some patients take this as a literal rejection from someone they now consider a parental figure. There seems to be no actual therapeutic value in this process. Raglan seems more fascinated by what the process actualizes.

Casting Oliver Reed in the film gave Cronenberg’s film a legitimacy to wider audiences. The cast of Cronenberg’s two previous films consisted of mostly Canadian actors. Not these were terrible performers (and he’d continues to use Canadian actors in his films) but none have the presence Reed carries. Here is a genuine movie star (no offense to Barbara Steele in Shivers) and a legitimately great actor in one of his horror films. He also has a link to the horror of the past having been an actor in several Hammer films. In Reed though, Cronenberg finally realizes an archetype he would perfect over the next decade; the modern mad scientist. Mad scientists up to this point might be passionate or frequently filled with regret for their actions. Reed instead portrays Hal Raglan as cool and detached. He observes and tests his theory of pyschoplasmics, even to its limits. What Nola can do and give birth to, fascinates him as much as it possibly repulses him. What he witnesses may be grotesque, but there’s scientific value. It’s the beginning of an archetype that’s apex would be seen in Jeff Goldblum’s Seth Brundle and Jeremy Irons’ Mantle brothers.

When Samantha lifts her dress at the very very end of The Brood, we’re not just witnessing a horrific sight. This is the birth of David Cronenberg as we know him, an auteur whose unique brand of body horror launched a thousand nightmares. The Brood was Cronenberg’s fifth film. His previous films may have announced a unique voice but it’s The Brood that made him worth listening.