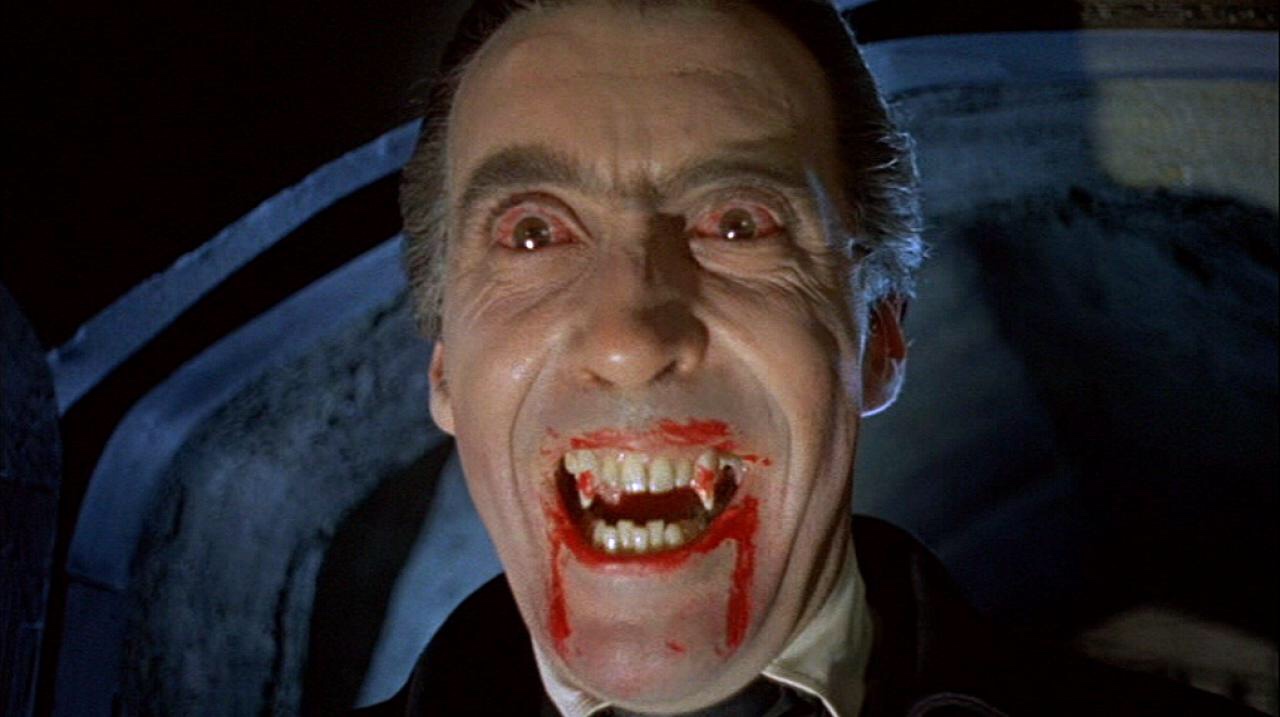 Let me start with the following declaration; if you watch a Hammer horror film, you’ll want to watch ten of them. After watching The Satanic Rites of Dracula, I had to watch another Hammer produced horror film. Since that was Christopher Lee’s last Dracula movie, why not revisit his first? Rewatching Horror of Dracula, or just Dracula if you’re From the UK, you immediately get not only why these Hammer films became so iconic, but how so many films followed their example.

Immediately striking about this film, in contrast to Universal Studios’ Dracula starring Bela Lugosi, is how faithful it is to Bram Stoker’s novel. There’s some liberties here but it more or less follows the basic story. Jonathan Harker is librarian instead of a lawyer and engaged to Lucy Westenra (Holmwood here). He’s also secretly a vampire there to kill Dracula. Arthur is Lucy’s brother and not her suitor. Also, the movie ends with Dracula and Van Helsing having a fist fight something definitely not in the novel. These differences though exist to make the movie more cinematic.

And honestly, Horror of Dracula is the most cinematic adaptation of the novel Dracula since F.W. Murnau’s bootleg adaptation Nosferatu. While Werner Herzog’s Nosferatu remake and Francis Ford Coppola’s Bram Stoker’s Dracula would eventually succeed this film in that respect, this adaptation still holds up. Thanks to Terence Fisher’s direction, Jack Asher’s incredible cinematography, and Bernard Robinson’s gothic production design, Horror of Dracula still looks incredible almost 65 years later. This film uses the process of technicolor to give the film a slightly dreamlike quality with all the super saturated reds and blues. There’s few horror movies before or since that look or even feel like this.

I don’t know if there’s anything else I can add when writing about Christopher Lee’s career making performance here. Bela Lugosi might be slightly more famous but this is the Dracula everyone tries to follow. What’s so incredible for me about this performance is that it’s a truly physical one. His Dracula only moves when he’s required. Most of the time he surveys the area like a sentinel. When it’s time for him to act, you believe he moves with incredible speed and animal physicality. When Van Helsing hunts him at the end, Lee runs like a caged animal. Because there’s not a whole of dialogue, Lee uses his body to fill in those gaps.

And looking at the horror of the time, you can see an immediate influence. It’s hard to not think both of a film like this and Mario Bava’s color filmography. Bava’s black and white film Black Sunday may take its cues from old Universal films but his later color film Kill, Baby, Kill could fit alongside Horror of Dracula. Looking at these films inspired Roger Corman to do his Poe cycle of films. Director Nicholas Roeg was a cinematographer on Corman’s Masque of the Red Death before he directed the ghostly horror of Don’t Look Now. The chain of influence goes on. Just watching this film you can see how many other directors, artists and writers continue to borrow from this.

With this film (and 1957‘s Curse of Frankenstein), Horror of Dracula ushered in a new era of horror. It became a calling a card for the house style of Hammer Films. Christopher Lee became an icon. Production design and cinematography for horror films finally entered the color era. Anyways, I will try not to watch nine more Hammer films for this challenge. It won’t be easy.