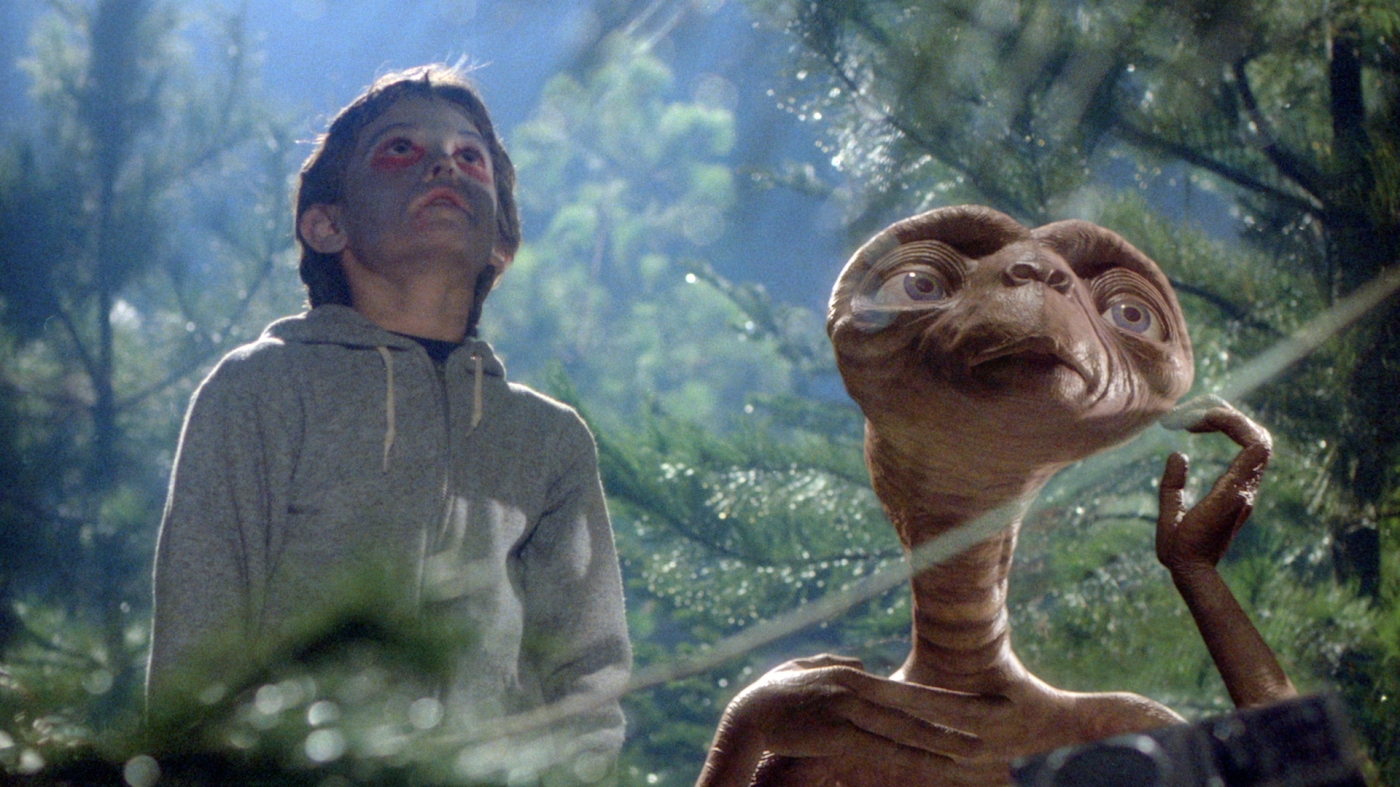 A few disclaimers before I get into this. First, I am 8 days older than Steven Spielberg’s E.T. The Extra Terrestrial. Second, my first memories of seeing a movie are my dad taking me to see this probably during the ’85 re-release. Third, I am of the generation whose parents, when they needed 2 hours to themselves, would plop us in front of the television and put this in the VCR. This is a a film that I have very vivid memories of seeing. This is a film whose scenes and beats I know intimately. It’s a film that I feel a connection to on some level.

Last week, I went to see the new Dragon Ball film in IMAX in a crowd of people primed for that movie. However, when the Universal logo and the credits for this started, the crowd lost it. Whoever was in the projection booth clearly forgot to switch movies, so the crowd started to loudly object to what was on screen. While I was amused by the whole situation, I found myself caught up in what was on the screen. I had not seen this in ages and the images came flooding back into my head: the enormity of E.T. wandering alone through the forest; the strange plants and fungus populating the interior of the space ship (the gold mushrooms always freaked me out). The intrusion of headlights and floodlights from the NASA agents. Eventually the film we were supposed to watch came on, but the experience left me wanting to experience E.T. again.

Taking the time to revisit E.T. this week was a profound experience for me. I had seen this film so many times as child, and I understood it as a child. This is the film of a young boy, Elliot, and his siblings who meet a stranger from outer space. They form a connection with this new friend they call E.T., who wants to go home. Eventually, Elliot has to say goodbye to E.T. but they will always be friends. It is in line with the stories we are told as children.

Now I came to it as an adult. I recognized the immense loneliness of both E.T. and Elliot. I saw the storytelling tricks Spielberg used so when Peter Coyote’s face comes on screen, we know. While as a child I may have subconsciously known this was a family of divorce, I really felt it this time. Dee Wallace does a magnificent job portraying a single mother barely holding it together. She’s never shows it but when one of her children says the wrong thing or misbehaves, you can see her facade crumble.

And all of the kids are such a unit. They know her pain. They convey the fights, the arguments, and the pain of that separation and how they’ve bonded over it perfectly. When Henry Thomas’ Elliot begs E.T. to stay on Halloween night, you know Elliot can’t stand to have another person leave him. One of the most heartbreaking scenes of the film is when he and his brother Mike find their dad’s shirt in the garage. They talk about baseball games and popcorn fights. But the most powerful moment is when they both smell his shirt. Mike says it smells like Old Spice and Elliot remembers it’s Sea Breeze.

As I watched E.T.’s death, I realized that this may be the first piece of media about death I consumed. As an adult, you know it’s a puppet and having seen this so many times, I know E.T. lives again. As a child, and thanks to Carlo Rambaldi’s puppet, it’s upsetting when they use the defibrillator on E.T. in that scene. Watching as an adult, I thought about the fact my paternal grandfather died in ‘87 and that my great grandmother passed away not long after that. I thought about how E.T.’s “death” and eventual leaving may have prepped me for those events.

As an adult I recognized how incredibly personal this film must have been, and must still be, for Spielberg. Watching this and knowing he was a child of divorce color moments like the shirt scene or Dee Wallace crying at any mention of Mexico. I couldn’t help but notice the use of Peter Pan, a story Spielberg famously loves, as a bedtime story. Reading it, specifically the section with the death and resurrection of Tinkerbell, it’s hard not to think of E.T.’s resurrection later or that he makes the children fly to a place just for them. For me this is the quintessential Spielberg movie; somehow none of his other films resonate the same way, centering on the incredible or about people doing the right thing.

Ultimately though, watching E.T. for what must have been the first time in years I had to watch it as both a child and adult. It is a children’s story. Not that it’s simply a story for children, but it’s a story that asks us to be children. The film asks us to be like Peter Coyote’s scientist who tells Elliot that meeting someone like E.T. is all he’s wanted since he was ten. It asks children to go on this journey whose structure is very familiar to them. It asks the adults to remember the stories and films of their childhood. At the end though, it reminds us that while we can’t always be children, we can always remember childhood and those that leave us.

One thought on “Revisiting E.T. The Extra Terrestrial (1982)”