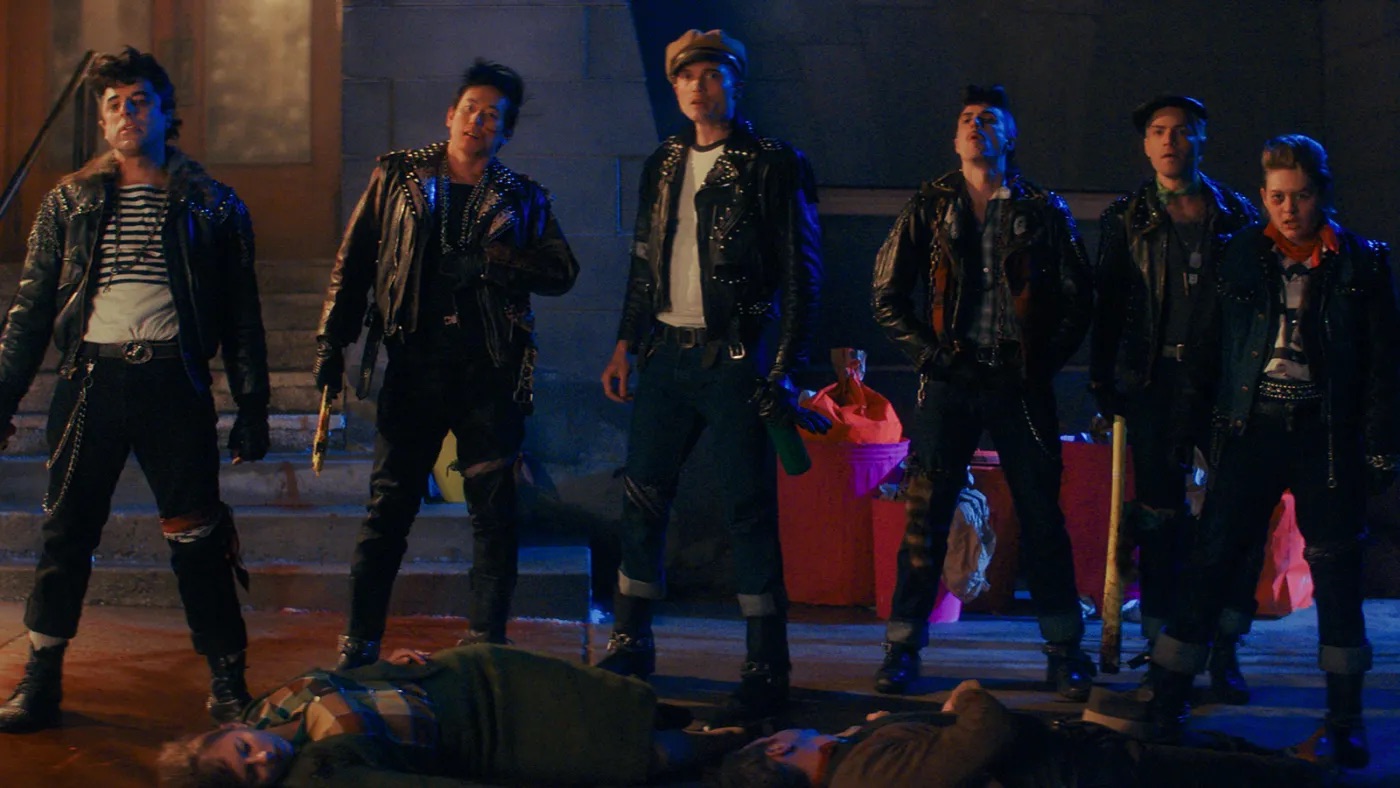 Watching a film like Amanda Kramer’s Please Baby Please feels like looking into a window of the past. Not so much because it’s a period piece though that is a window into the past. No, it seems like a film that would fit alongside independent films made in the 1980s like Blue Velvet or Stranger Than Paradise. This was the heyday of filmmakers working outside larger studios to craft personal visions knowing an audience was bound to find them. When the term independent films is used today, the films that come to mind tend to be gentle comedies or launchpads for directors to helm franchise films. Please Baby Please however is an intensely personal vision from a director about gender and sexual fluidity.

Suze and Arthur, a bohemian couple in 1950s Manhattan played by Andrea Riseborough and Henry Melling, witness a murder in front of their brownstone. The perpetrators are gang called the Young Gents. On the outside this looks like a group of typical 1950s greasers. They have the leather jackets and the exaggerated hairstyles. The members carry themselves as an unstoppable group of tough “guys”. However, something looks off about these gang members. They seem more out of Jon Waters’ Cry Baby than The Wild One. They all seem more like they present as masculine than identify as it. The couple return to their friends telling them about the incident. Suze seems excited by the violence witnessed while Arthur seems confused by the way those individuals present themselves. What has this encounter awakened in them both?

This gets at the thrust of Please Baby Please, gender and sexual fluidity. This is a defiantly queer film. Seeing the Young Gents in action awakens something in both Suze and Arthur. For Arthur, he increasingly realizes he doesn’t want to fall into the traps of conventional masculinity. Things like arguing, and competition don’t interest him. He finds himself attracted more and more to the Young Gents member Teddy. For Suze, it awakens her own desire to be powerful. She wants to dominate and be dominated. Violence, inflicted on both others and herself, feels satisfying to her.

Both Andrea Riseborough and Henry Melling rise to the challenge of this film. Riseborough, who also produced the film, gets the showier role and runs with it. As Suze, she struts and prowls through the constructed New York sets. Riseborough’s Suze is a purely physical creature. The way she moves with her hands in her pockets is both playful and menacing. The audience never knows if she will playfully tease a person with a jab or if she will straight up sick them.

Melling’s performance is the intellectual Yang to Riseborough’s physical Ying. Melling’s performance is all internal. It’s in the looks he gives and his stiff posture. Melling’s Arthur tries to navigate the confusion at the awakening of both his sexual and gender identity. When Arthur first speaks, he tells the audience his lack of desire to fulfill traditional heteronormative gender roles. Throughout the film, he continues to reconcile his feelings for Teddy with his marriage to Suze. Like Riseborough’s performance there’s a simmering rage with Melling’s Arthur. Its simply under the surface. When in a final musical number Melling finally dances in exuberance, we know Arthur reconciled with who he is.

Writer/director Amamda Kramer crafts a film fully committed to creating a delirious queer fantasia. She uses a limited color palette with everything lit in pinks, blues, and purples as if to scream “bisexual lighting”. This is a fever dream where gender and sexuality is meaningless. The cast is filled with non-binary actors or actors presenting themselves in a different gender). Musical sequences bookend the film while Suze’s desires get expressed in dream sequences full of actors in leather and S&M gear. Everything seems like it’s a step removed from things as if to say that everyone here created their own space to exist.

Please Baby Please is a reminder of the spaces that independent film can creates. Amanda Kramer doesn’t bother trying to fit into any preconceived notions of that term. Clearly this film is a personal vision she had to unleash. It is an aggressively sexual and strange art film. In a world where every film seems premarketed and designed to fit into a niche, we all could use more of that.