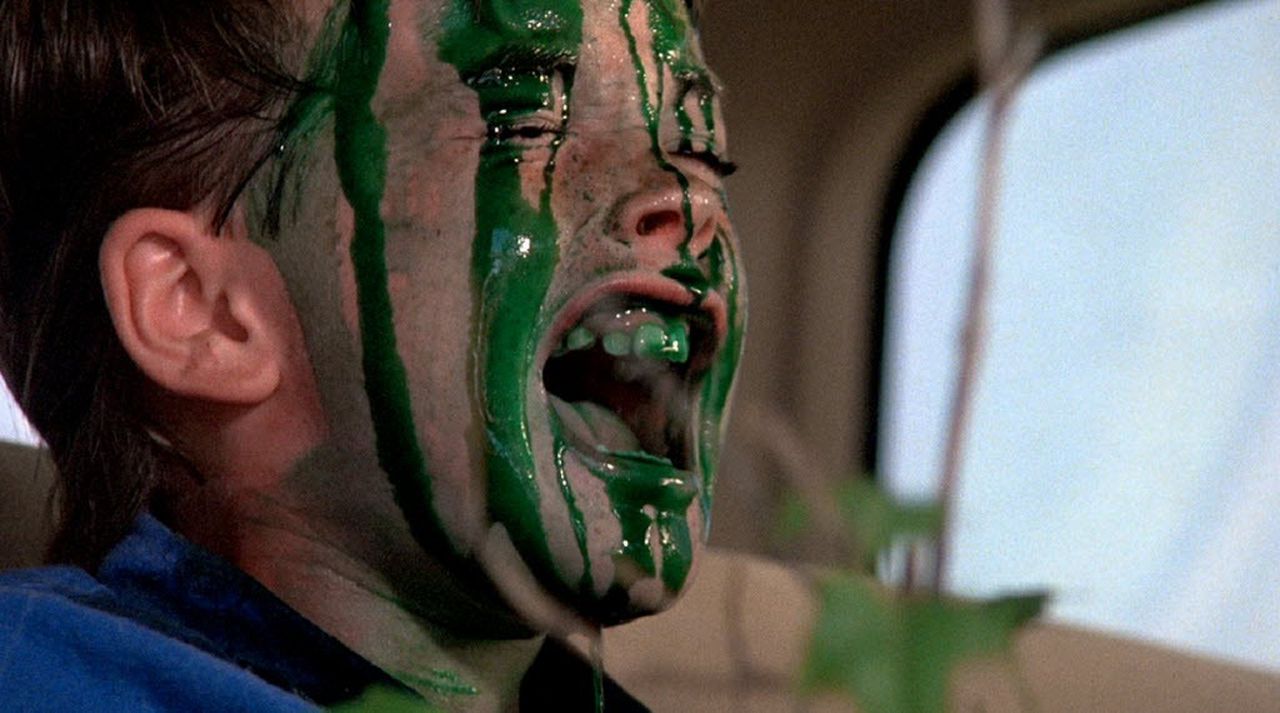 I don’t know if Troll 2 is the absolutely worst horror sequel from the 90s per the Hooptober guidelines, not do I know if the documentary about the film is correct in labeling it the “Best Worst Movie”. What I do know is the film has gained enough notoriety and schlock fans that when I saw it was available via Amazon’s FreeVee service I decided to take the plunge. Guess what? It’s pretty terrible. But it’s also just weird enough to not be completely unredeemable. I think I’m glad I saw it, even though I’m 99% sure I’ll never see it again – at least by choice.

THE QUICK SUMMARY: The Waits family (no relation to Tom, sadly), recovering from the death of patriarch Grandpa Seth decides to do a house exchange with a family in the rural town of Nilbog. Young Joshua has premonitions of how bad an idea this is thanks to the appearance of Ghost Grandpa™ warning him that goblins (not trolls) are real and ready to turn you into plant-based nutrition so they can eat you. You’d be shocked to learn no one believes young Joshua, so off they go followed by young daughter Holly’s boyfriend and his loser crew. What dangers does Nilbog hold? How about that 80s Italian prog in the beginning of the film, huh? Not to mention the poorly costumed “goblins” and their wicked druid leader who feels like sexy goth witch librarian was on sale at Party City…Joshua certainly has his hands full!

So yeah…this is actually a completely separate picture originally titled Goblins that was changed in America to capitalize on the massive success of Troll (I’m kidding here). So all thoughts here relate to the film as intended and not as an actual sequel to that film, which I’ll sheepishly admit I really liked as a kid.

Taking the connections to Troll out of the picture doesn’t help this film at all, sadly. The less said of the performances the better; I had a hell of a time with the father, played by George Hardy because he looked so much like b-move favorite Tim Thomerson with none of the charisma. Strangely the only one who really works here is Michael Stephenson as young Joshua. He plays it for all its worth, and the scene where he resorts to urinating over everyone’s food to stop them from eating (eating the goblin’s food make you change into the human/plant mess that they consume) is probably the best scene in the entire film.

Oh, except for the end where it turns out eating a double bologna sandwich saves the day. You read that right: a large part of this movie’s intent was to skewer vegetarians, according to Wikipedia’s entry on this. Honestly, it seems as good a reason as any to make a film this bad.

I’ll give Troll 2 one more big prop before I go. The header image for this post shows an early nightmare sequence where Joshua eats a donut and start to transform in the plant mess. It’s a truly great piece of effects work: look at his hands with the branches sticking out of them. I don’t know why, but I think that effect is terrific, and really creepy.

If only the rest of Troll 2 was the same.