If I had to boil down my renewed interest in movies (going on 10 years at this point) to one thing, it would be the realization that the history of movies is broader than I ever imagined. There are so many movements and trends filtered back and forth across cultures and time periods it’s unlikely I could ever reach the end of movies. I think the best moments on Cinema Dual tend to be when Chris and I find a film that make one of both of us just a little too giddy to coherently talk about it. And while the recent(ish) trend of trying to assert the supreme importance of and unhealthy attachment to a particular work of art has exposed the bankruptcy of fandom in recent years, there’s nothing wrong with celebrating the joy in something you like. 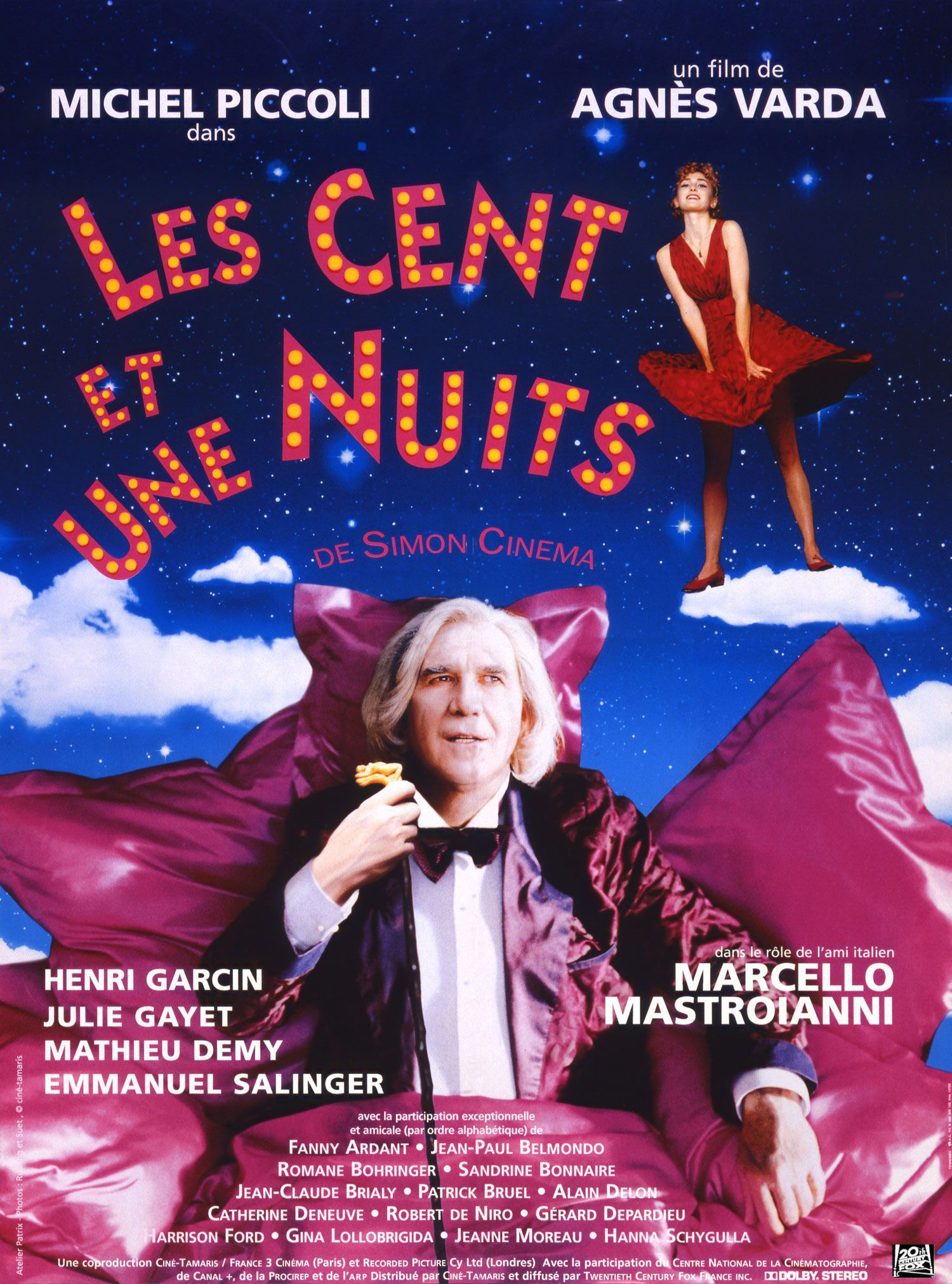 In the midst of a handful of different projects covering the work of her late husband Jacques Demy, Agnès Varda decided to pay tribute to the last one hundred years of movies by putting together a quirky comedy called One Hundred and One Nights (1995). In theory, this movie has a plot about a 100-year old man who is the literal personification of “the movies.” In practice, the audience is invited to a lovingly crafted collage of recreated  moments from classic movies fitted around a series of conversations about movie history between actors playing fictionalized versions of themselves. While the elaborate sets and production design require an obvious high level of planning, the energy the actors bring to the film evoke a sense of casual playfulness. It brings to mind the better parts of Jane B. par Agnès V.

Speaking of which, the cast for this project is absurdly stacked, given the nature of the project. Varda pulls in previous collaborators, like Michel Piccoli, Jane Birkin and Sandrine Bonnaire, the latter of whom comes dressed as Mona from Vagabond but is transformed into a princess, simply because Varda thought Bonnaire deserved a more glamorous scene. But Varda seemingly stretches herself by pulling in celebrities like Robert De Niro, Catherine Deneuve, Harrison Ford and (inexplicably) Stephen Dorff. The list goes on and on.

Central to any sort of plot this film has are Piccoli as the titular Simon Cinema, Marcello Mastroianni as “the Italian friend”, and Julie Gayet as Camille. Camille is the young film student hired by the centennial Simon to regale him with stories from movie history for a few hours a day. People come and go to Simon’s estate to pay their respects, and enchanting times are had by most. The only person not really having a good time in this movie is Camille’s boyfriend, played by a sulking Matthieu Demy. The other plot this movie has involves Demy trying to get Camille to con Simon out of his fortune so that they can fund his first movie, but Camille finds the experience at Simon’s so enthralling that eventually she (and the movie itself) just lets the plan go.

If there is something that the movie is about, other than being the movie equivalent of a Girl Talk mashup album, it’s about how we cherish our good memories even as our minds lose track of the details. When characters are having their daily movie conversations, they argue back and forth over misremembered facts about who starred in what constantly, but ultimately no momentum is lost in the experience. Varda, by this point in her mid-60s, said that this confusion was reflected in her own life, as she looked back to remember things but not always 100% able to grasp minutiae as sharply as in her youth.

Between last week’s films about Jacques Demy and this particular project, it seems like Varda spent a decent chunk of the 1990’s looking back into film’s history, both her own and at large. There’s hardship to be found sure, but also delight as well. And why back away when you can instead find something that makes you just a little bit too giddy to talk about.