The problem of evil is typically relegated to cosmic and philosophical concerns, and the centuries of continually progressing debates do not speak well for any particular theodicies that have been presented so far. But that frustration doesn’t necessarily subside on the other side of religious belief. A worldview (religious or otherwise) that provides meaning can be very appealing. Consequently, events that don’t fit within the structure of that view can feel threatening to one’s sense of stability, and should be ignored if possible. 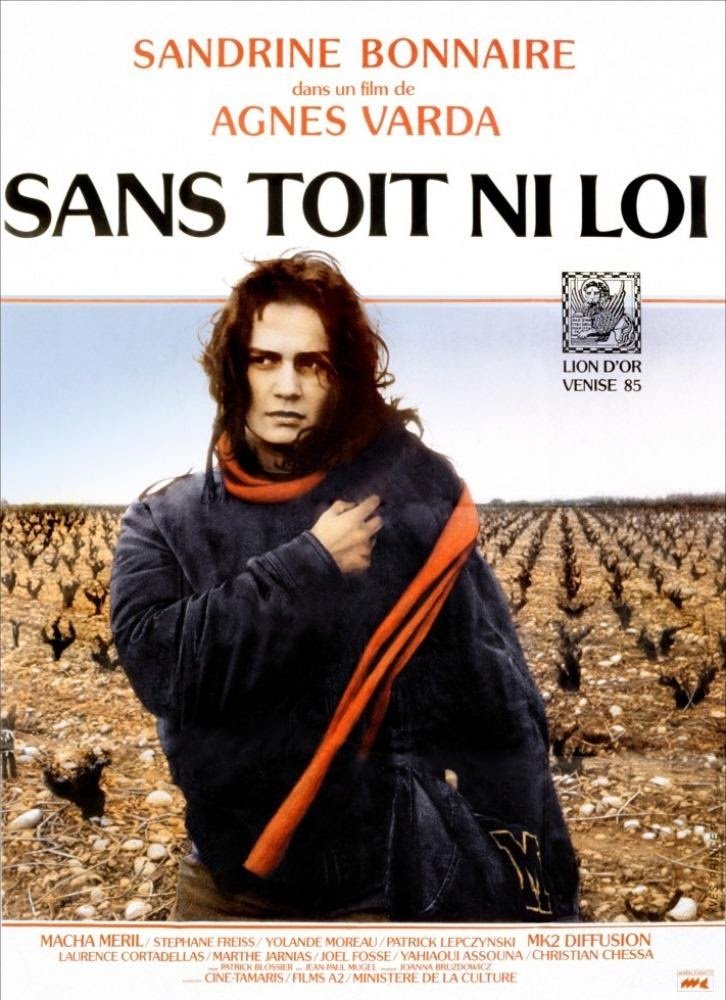 The impulse for creating Vagabond (1985) seem to come from a desire of Varda’s to answer an unanswerable question. Specifically, Varda takes the real life occasion of learning of a death of a drifter as a chance to investigate what personal and societal forces combine to produce such a terrible result. Varda’s film explorations often focus on people in the margins of society, and Vagabond begins not only with the death of the protagonist Mona, but with a superficial and uninterested investigation by police. Varda’s only narration in the film picks up at this point, where she states a desire to look closer at the last few days of Mona’s life.

Though fictional, Varda uses her skills as a documenter to sketch out those last few weeks, intercutting scenes of Mona’s travels with interviews of the people she comes across. The reactions of the interviewees span a broad range of emotions, from envy to sympathy, from disgust to empathy. These responses speak volumes about the people speaking them, yet they can’t fully capture what’s going on with Mona. On our Varda podcast, Chris and I talked about how Mona’s opaqueness is largely what makes the film both frustrating and compelling, because it draws the viewer in and asks them to try and figure it out for themselves.

With no definitive answer to the film’s central question, one’s attention gets pulled outward to a surprisingly inter-connected network of people that form the periphery of Mona’s life. The people who run across Mona the most are the couple Yolande and Paulo. Paulo and his biker gang first spy upon Mona as she comes out of a bath in the ocean. Later on, Yolande will find Mona and her brief fling David sleeping in the property she is paid to look after, and will romanticize what will in actuality be a very short-lived affair. Near the end of the film at the train station, as Yolande is being fired for being an accessory to Paulo’s crimes, she will see a much worse off Mona and wonder how she got there is so short a time.

The person firing Yolande is Jean-Pierre, a young man whose elderly relative was taken care of by Yolande, and who also works for Mme Landier. Mme Landier takes in Mona out of a sense of sympathy for her plight, and while trying to help Mona, Jean-Pierre shows his discomfort at having to be around someone like Mona. At the train station after firing Yolande, Jean-Pierre also sees Mona, and calls Mme Landier from a phone booth, cowering and disgusted at Mona’s appearance. These connections help to form the world of Vagabond, but with Mona as the throughline to everyone, it returns us eventually to our answerless questions to start the process again.

That desire for knowledge also undergirds the short film 7p. cuis., s. de b., … à saisir (1984) though admittedly in a more surreal way. The prompt for this short exploration is a simple real estate listing, and the film’s narration has the realtor talking to his prospective client, a lawyer, about the odd circumstances of the history of the house and why it is being sold. What follows is a series of short, odd scenes of a family in the midst of varying kinds of familial strife, all leading to the conclusion of the narrator saying that what we saw was just a guess. You do get the feeling from one of the girls and the wife the feeling of being stifled, so even though no answers can be given concretely, you can guess at where Varda’s head might be at.

My personal take away from Vagabond is a combination of tragedy and appreciation. The film sets up Mona’s death at the beginning, and her travels through a dangerously negligent or malicious world will strip her of what she has left. Simultaneously, Mona refuses the few offers of help she gets because it would constrain her, and at least a few people admire her for her perceived freedom. If One Sings The Other Doesn’t has tinges of ambiguity that frustrated its contemporary audiences, Vagabond greatly amplifies that feeling, with the result being one of Varda’s more challenging, enduring works.

Next time: Jane B