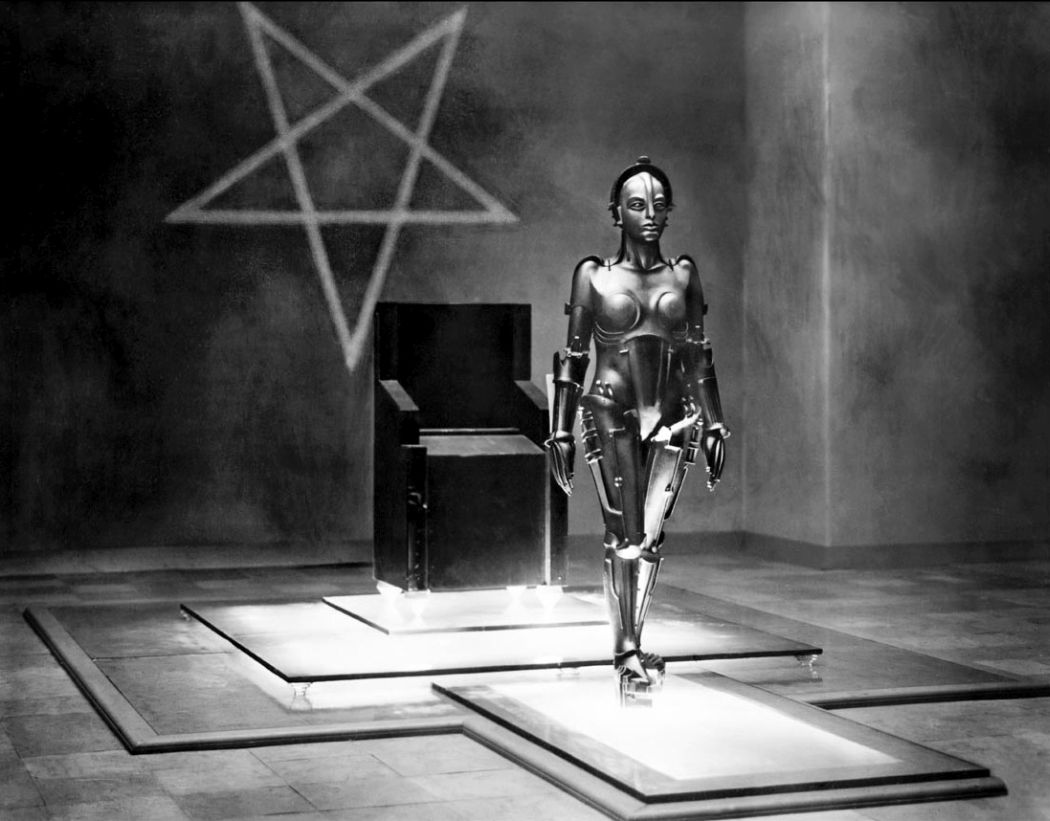 I suspect many of us knew Metropolis before we ever had a chance to actually see it.  My first exposure to it as a complete (or as close as it was considered to be then) film came in the early 90s with the color tinted Giorgio Moroder version, edited (severely) and scored by the electronic music pioneer.  Re-scoring a film is film is nothing new, and there are times where I really dig the interpretations: check out Nosferatu as scored by Canadian rock band Shooting Guns as an example I’m particularly fond of – But the images – those stark, expressionistic cityscapes rising to the heavens, the iconic “Other” Maria sitting under an inverted pentagram as rings of electricity pulsed around her or, in my instance the brand most burned upon the brain: a solitary man fighting to maneuver two rods attached like the hands of some nightmarish clock (with only ten hours to squeeze in an extra work day I’d learn years later), vainly aligning them to flickering bulbs that never stay for more than an instant – those images echo and reverberate within my movie memory far longer than I have any right to claim to them.

Watching the new “complete” version of Metropolis on Blu-ray, featuring over 30 minutes of additional footage recently unearthed in a vault in Buenos Aries, and boasting a gorgeous 5.1 recording of the original score brins those images vibrantly back to life, feeling as new and striking as the memories I hold of them.  The difference being that those singular visual memories are now tied together in a coherent structure, acting as signposts on a road where the story, long held to be a shortcoming of the film, comes to the forefront.  Running just under two and a half hours, it’s surprising that Metropolis actually feels shorter, as the additional footage brings a depth to the story that engages the viewer as much as the overall design and effects did in the past.

The epigram that starts Metropolis reads: “THE MEDIATOR BETWEEN BRAIN AND HANDS MUST BE THE HEART!” and this message echoes the tone the rest of the film will take.  The colossal city of Metropolis is actually two cities: the sprawling, dreamlike upper city where the white collar executives (the Brain) run everything, building gargantuan gardens and stadiums for the delight of their young, brash sons, and the underground city of the the workers (the Hands), who sweat and starve and toil to keep everything running for those privileged who live above.  The city is run by Joh Fredsersen, who has no time for anything other the running of the city, much to the dismay of his son Freder (Gustav Fröhlich), who is driven to see how the city lives and breathes for himself after meeting the saintly Maria, who intrudes with a mass of children into the upper city’s Eternal Gardens. It turns out Maria is the one thing holding the workers in check from rioting, and his heart goes out to them…and to the beautiful woman who hopes for a brighter future.  His father – as fathers often do in these films – likes things the way they are, and he enlists the assistance of the evil Dr. Rotwang, who uses his newly created Machine Man to take the form of Maria and incite the workers to revolt, thereby allowing Fredersen the leeway he needs to put the workers down once and for all.

Although the earlier cuts of Metropolis were more than enough to show the visual genius of Fritz Lang, the restored, complete version takes his directing prowess to another level entirely.  Entire subplots are revealed, showing a deft hand at parallel storytelling and artful cross-cutting between events.  We see the fate of Worker 11811, the poor man at the clock machine who Freder replaces.  He takes Freder’s place, only to fall prey to the vices Freder himself is escaping.  We see the mysterious Thin Man (most assuredly not Nick Charles), hired by Joh Fredersen to find out where his son is and to expose what’s going on with the workers.  The climactic flooding of the underground Worker City is much more substantial, and as Lang cuts from one set of action to another we that Metropolis is not only the progenitor of much of our now classic science fiction imagery, but it also works as a phenomenal action film, ratcheting up tension as fine as anything that would come a quarter of a century later from more modern masters like Alfred Hitchcock (who was reportedly a visitor to the set, according to the excellent documentary that is included with the DVD/Blu-ray).

I mentioned earlier how much better the restored film plays as a whole, even though it’s substantially longer than it was before.  This comes at a small cost to some viewers: due to the conditions of the newly found footage (a 16mm reduction taken from an original 35mm print) the new section are very rough – no amount of digital re mastering can take away the lines of age and missing section of the frame due to size.  Small price to pay, however, to see a true film masterpiece as close to its original format as we can get – there’s so much in Metropolis that stands out throughout the language of cinema – the excellent documentary included on the disc opens with the direct influence the film’s architecture had on Ridley Scott’s Blade Runner.  Roger Ebert, in his Great Movies essay on the film, remarks on influences as far reaching as Dark City, Batman, and even Dr. Strangelove.  And after watching the stunning Blu-ray transfers of the Back to the Future films, I can’t help but see some of mad Dr. Rotwang in good ol’ Doc Brown.

In its truncated form, Metropolis was a grand achievement in filmmaking.  Seeing the crisp, clear images now, being able to grasp the story as a whole, and reveling in the sheer joy of the technical effects on display, what was a towering work is made even more colossal, even more grand and enormous.  And even better, the storytelling on display is as fresh, as engaging, as it must have been to people experiencing its like for the first time, over 80 years ago.