One of my favourite cinematic surprises of 2020 was the documentary Dick Johnson is Dead. Director Kirsten Johnson, as a means of processing the deterioration of her father’s health and eventual passing, sets up several mostly fantastical scenarios in which Dick might die. Dick himself seems game to have some fun, demonstrating the trust, respect and love the filmmaker and subject have for each other. The film is alternately silly and painful as you track Johnson’s emotional journey through the process. This brings us to the complicated relationship between Agnès Varda and Jacques Demy. 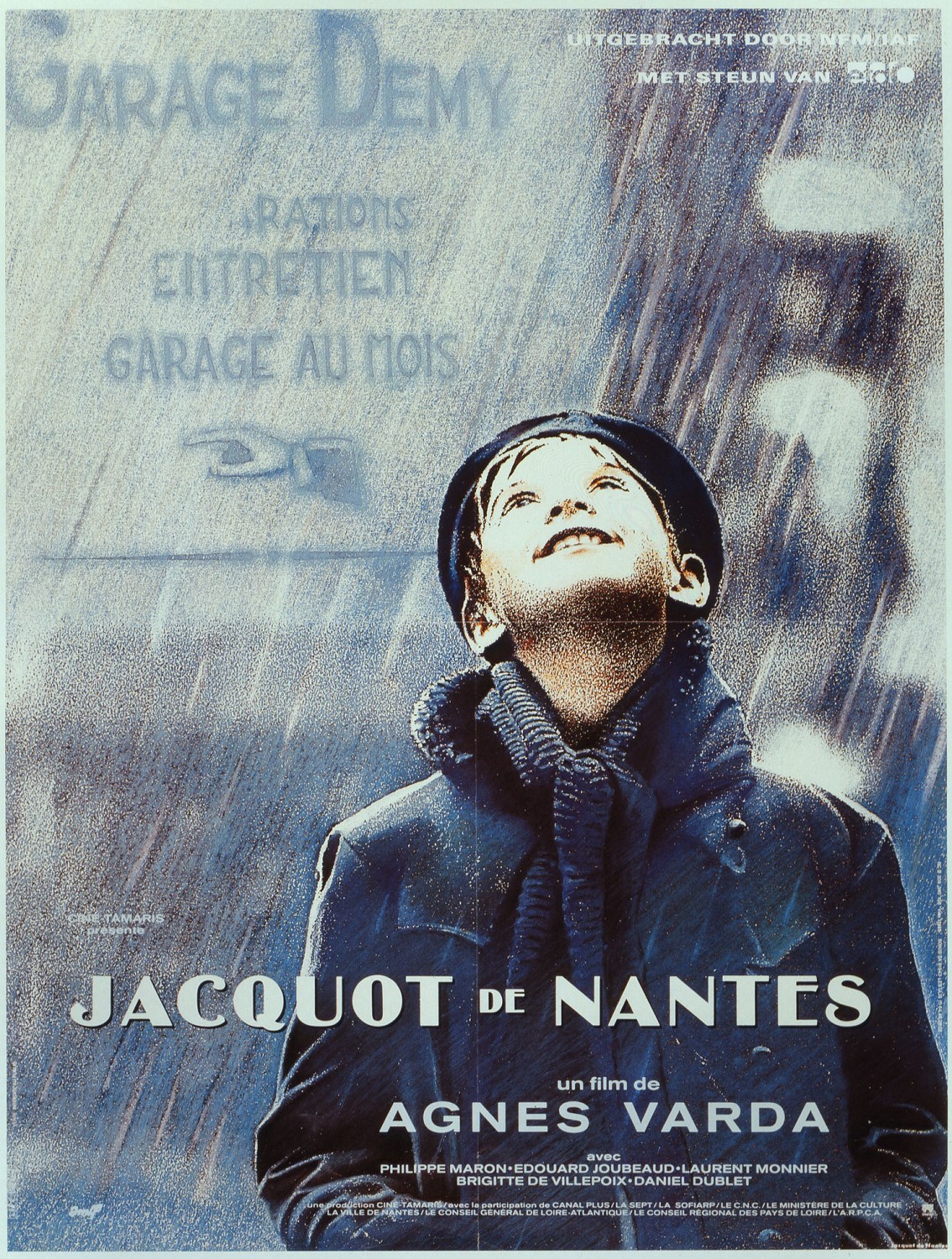 While separated for most of the 1980s for unspecified reasons, Varda and Demy reunited in 1988, two years prior to his passing. With some sense of his own failing health, Demy began writing down his childhood memories, especially those that related to his young obsession with movies. Varda found these writings compelling enough to use as the basis for what would become her tribute to her husband and fellow filmmaker, Jacquot de Nantes (1990).

Because the stories dramatized here are largely set in occupied France, the first thing you notice is that there’s a scale of production that, while certainly not beyond Varda’s skill as a filmmaker, she doesn’t often feel the need to pursue. The army trucks, costumed soldiers marching the streets, all of those bigger details actually feel closer in spirit to Demy, whose work seemed to be more akin to traditional Hollywood filmmaking than his partner’s. The film’s subsequent focusing on Demy learning and experimenting with how to make his own films are also apparently correctly detailed enough that in some cases, they were filmed in the same locations where the events depicted actually took place.

The rest of the movie I’d say though, is pure Varda. The structure of this movie seems to be pulled from Jane B. par Agnès V., except done earnestly instead of as a lark. The childhood dramatizations are often designed to evoke and then lead into scenes shown from Demy’s films. Attempts to draw parallels between an artist’s life and their work can occasionally be disastrous (ie: Tolkien), but here it works mostly because of Demy’s participation as subject and consultant.

Interspersed throughout the film are what would become the last interviews Demy gave during his life, reflecting on his life and career. Indeed, he passed away immediately after the film stopped shooting, and Varda had to edit and assemble the film while mourning her partner. And yet, possibly because of Demy’s illness, the whole project feels like it was built from the beginning to be a presentation of Demy’s life and work through Varda’s own artistic sensibilities. Though the two notably always gave each other space when it came to their own filmmaking careers, Jacquot de Nantes is likely the closest they ever came to a proper collaboration.

While I don’t know if Jacquot de Nantes gave Varda the catharsis she needed to process Demy’s passing, it is clear that she was felt a need to continue championing his work as an artist. On the 25th anniversary of one of Demy’s most successful films The Young Girls of Rochefort, Varda produced a documentary titled The Young Girls Turn 25 (1993). Using archival behind the scenes that she shot during the film’s production, along with new interviews from surviving cast and crew, and footage from the anniversary screening in Rochefort itself, Varda is able to show the film’s impact on the community that came together to make it.

My favourite part of this documentary is just how extensively into the crew and community Varda is able to reach in order to bring out these stories. In a retrospective like this, you would expect interviews with stars like Catherine Deneuve, but in typical Varda curiosity, she incorporates stories from extras, people who have clear and vivid memories of their brief experiences on a movie set. There’s a story recounted about how to achieve the colorful style that would define the film, the filmmakers had to convince the townspeople of Rochefort to allow them to paint all their windows specific colors, and the response was unanimously positive. As for Demy himself, he has a presence throughout the movie, but Varda’s perspective here is mostly as a fan of The Young Girls of Rochefort.

After doing two whole movies about different aspects of Demy’s life, Varda apparently didn’t feel like she had run out of things to say. For The World of Jacques Demy (1995), Varda once again shifted her focus back to Demy himself, this time on his whole filmmaking career. While Varda’s tendency to cover her subjects thematically instead of chronologically keeps things from getting predictable, I think what is surprising about this film is how straight forward it is.  Sure, getting to listen to Harrison Ford tell a story of being uncomfortable at a sex shop with Demy when they were planning to make a movie together is surprisingly delightful. But if I was teaching an intro course on the films of Jacques Demy, this film would almost work as a course syllabus.  It almost feels like Varda is trying to get out of her own world, and reach out to more mainstream audiences calling for attention to be paid.

Mixing professional and personal lives is a fraught proposition, and Agnès Varda and Jacques Demy tended to for the most part tended to keep those separate. Though it obviously not our business to inquire further, there is enough suggested through their separation and in movies like Documenteur that their relationship, like most people’s, took some hits over time. But their eventual reunion and three movies after Demy’s passing, there’s something heartwarming in observing the personal and professional care that Varda clearly showed for her late husband’s work.