If I’ve found a recurring theme to the work of Agnès Varda, it would be a curious empathy. Over and over again, Varda’s ability to notice people on the margins of society results in interesting subject matter for her art. As it becomes increasingly clear we live in a world lacking in empathy, Varda’s artistic impulses end up benefitting humanity. Certainly, it’s hard to conceive of how they could betray her, especially as it relates to an “aging” actress. 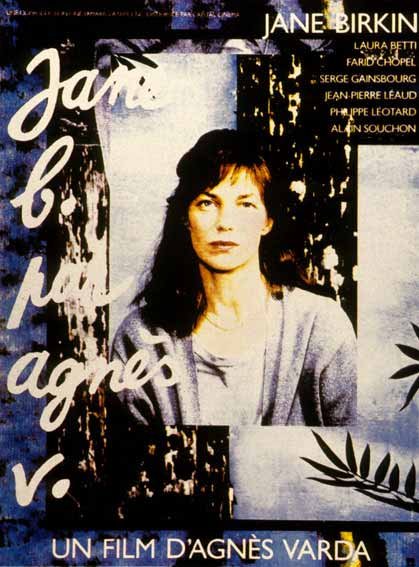 Upon the release of Vagabond in 1985, Varda received a letter from British actress Jane Birkin, who was a fan of the film. Unable to read her handwriting, Varda extended an invitation for Birkin to visit her in Paris. On getting to know each other, Birkin revealed to Varda that she felt insecure about turning 40. Varda in turn, saw that impending societal neglect for Birkin as an opportunity for Birkin to explore new creative avenues that wouldn’t have been available to her given the pressures of her acting career.

The resulting film, Jane B. par Agnès V.(1988) takes the form of an in memoriam montage that gets put together for well known figures once they’ve passed on, only in this case, the subject isn’t close to being dead. Instead of using actual archival footage from Birkin’s movies however, they shoot a bunch of fake archival movie footage, with Birkin playing a series of characters (like Joan of Arc, Laurel and Hardy etc…) that she never got to play in her career otherwise. It predates similar takes like the Community episode “Paradigms of Human Memory” that created all new material but presented it as a clip show by more than 20 years.

The other thread woven throughout the fake material are Varda’s interviews with Birkin herself, reflecting on her life and career up to that point. Varda finds Birkin fascinating as a subject that desires fame and recognition but not necessarily the visual trappings that come along with it, like fancy outfits. Years later Birkin reflected that Varda seemed to be putting a lot of herself into the movie, noting one scene shot at a casino was in fact the casino where Varda’s dad had apparently lost their family savings decades earlier. That back and forth between Varda and Birkin makes for interesting material; because of how it looks at a female celebrities’ relationship to fame, it feels like a different take on Varda’s most famous work Cléo from 5 to 7.

The movie begins to lose me when Birkin presents Varda with her idea for a movie about a middle aged woman who falls in love with a 14-year old boy. Given the film’s origins and content, you can see how Birkin landed on the idea of longing for one’s own youth and the fear of aging. But unlike similar sections, such as when Birkin works with her ex-husband to prepare for a concert in which she’ll be singing, this particular avenue for creative expression doesn’t feel like one that should have been encouraged. Unfortunately, it goes beyond being misguided into something worse.

For her part, Varda senses where Birkin’s story might not feel realistic, and suggests both that the 14-year old boy not return the woman’s serious affections, and that the societal consequences for this affair should be serious. That sense, however, is overruled when against the advice of others (including her partner and co-parent Jacques Demy) Varda cast her 14-year old child Matthieu Demy as the boy in the movie, putting her own child in the position of having act out this taboo relationship. Fully crossing he boundary of what’s appropriate and safe, it’s something Varda should have stopped in its tracks. Instead, Birkin and Varda turned into its own full fledged movie, Kung Fu Master (1988).

One of Roger Ebert’s most lasting quotes is “it’s not what a movie is about, it’s how it is about it,” but on a personal level I can’t reconcile that way of thinking when it comes to predatory relationships like the fictional one shown in Kung Fu Master; it actually IS what the movie is about. The “how” the movie goes about its theme becomes secondary, but if you want to engage that facet of Kung Fu Master, consider that while the movie ends with Birkin’s Mary-Jane being punished by having her kids taken away from her and having her affections for Demy’s Julien ultimately rejected, her final reflections can only reach the shallow level of “they think I’m a monster” without any serious consideration of how her actions were in fact, monstrous. There are whole subplots in this movie about AIDS, and the movie’s title is in reference to the video game that Julien is actually obsessed with, but anything of interest there gets lost to the movie’s central conceit. Agnès Varda can make us empathize with almost anyone, but I do not want to empathize with Mary-Jane.